Homeschool Not About Books

Although structure is important, sometimes parents forget that homeschool is NOT just about books and supplies.

Sometimes in our excitement to homeschool, we replicate the very things that cause our children problems in school.

I know several families who homeschool on a shoestring budget.

One of my boys hated anything that LOOKED like learning. If it was in a book, he was sure he didn’t want anything to do with it. The more I pushed, the more he pushed back. Learning became a time of stress rather than a time of wonder and joy.

Although his IQ is well above normal, he has some serious learning challenges.

The last thing he wanted to do was work on fractions or learn anything about history.

The stress of our power struggle was increasing.

The counselor had advised that I back off the books for a few weeks and allow him some space. Just give him somewhat of a break.

I decided to take him on a “field trip” to see Sequoyah’s cabin and home site just outside Sallisaw, Oklahoma. (Sequoyah was the inventor of the Cherokee alphabet.) Although he was quiet the entire day, he appeared to be paying attention to the man guiding him through everything. He especially spent a lot of time staring at the cabin, but again, not saying much.

On the way home, I remember thinking, okay, another great idea down the drain.

My mind was racing with ideas on how I could somehow get his attention, but he wasn’t having any part of it.

The next morning he woke up early and headed straight outside. He was building a tree house and NOTHING was going to distract him. No amount of encouragement was going to bring him in that house to work with “books”.

This went on for a week.

He would stay out there for hours, coming in only to grab a sandwich and take it with him, and to sleep at night. I was just reaching the point of thinking his counselor needed counseling because this was NOT working. Backing off was taking him even further away from learning.

At the end of the week, he came in the house filthy and soaked in sweat. He had a huge smile on his face as he was asking me if he could show me something. I followed him out, but I was absolutely positive he was going to show me something disgusting, like a huge snake.

He led me straight to the tree house and asked me to go inside.

Now let me tell you, from the outside this tree house looked pretty atrocious, but I was keeping my comments to myself because I knew how hard he had worked on it. However, I was extremely concerned that he was not INSIDE LEARNING.

Reluctantly, I began climbing the homemade ladder up the side of the tree. When I got to the top and peeked inside I was totally shocked.

I can still recall the feeling of complete astonishment at what I was seeing.

The inside of this tree house looked like a miniature replica of Sequoyah’s cabin.

I could not believe the detail, right down to using rope for the bed. It was absolutely incredible.

On the floor beside the bed were some scribbling notes, from him using the fractions I was desperately trying to teach him. Turned out he had taught himself as needed, with all the measuring he had been doing. He then told me the story of Sequoyah and how fascinated he was by it all.

That day, and many times in his life, instead of me teaching my son, my son taught me.

He continues to do so now as an adult. 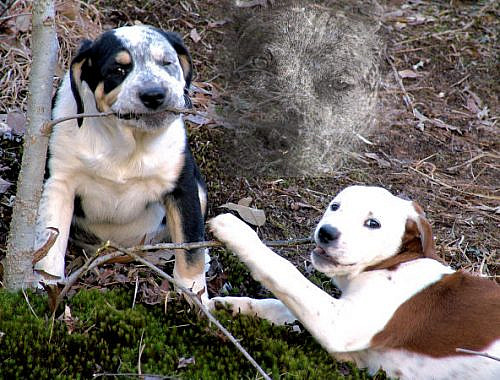 When a wonderful surprise shows up on your doorste